About the Course- Selenium Testing Training in Bangalore

Welcome to our selenium testing training in Bangalore

Selenium is a set of automated testing tools used for web applications across different browsers and platforms. Selenium generally focuses on automating web-based applications. The process of testing done using selenium tool is usually referred to as selenium testing. Selenium Testing Training in Bangalore conducted by Trishana Technologies is one of the best in the country. In this training, you will learn Selenium IDE, RC, WebDriver and Grid through hands-on projects and case studies. Additionally, Selenium is an open-source automated testing tool. As a result, selenium gained market share.

An Introduction to Selenium Training

Selenium is a tool that automates browsers. Primarily it is used for testing purposes but it is not only limited to that. It is able to perform web-based administration tasks as well. It has four components:

Selenium is supported by some of the largest browsers who have taken steps to make selenium a part of them. As a result of this Selenium testing courses in Bangalore have gained huge popularity and is being taken up by many more.

Objectives of our Selenium Testing Training in Bangalore

Selenium testing training in Bangalore is designed keeping the software professionals in mind who want to have automation exposure. The course of selenium testing training in Bangalore is designed in such a way that it is able to teach in-depth concepts of selenium 4 and Java. We focus on the basics first and then move towards the advanced concepts of Selenium, Java and framework development.

How is Selenium Different Than Other Testing Tools?

A testing tool ideally supports one or multiple test activities like planning, requirements, test execution, etc. Selenium has taken the world by storm and has emerged to be the number one testing tool. Therefore selenium automation testing training in Bangalore of Trishana Technologies is one of the most popular and sought after courses by the students. It is different from other tools in many ways. Some of them are:
Selenium is a tool that automates browsers and has received the support of several browser vendors as well.
Selenium is an open source testing tool very cost effective.
Selenium supports many programming languages like Python, Pearl, Ruby, PHP, Java, etc.
Selenium is such a testing tool that supports a range of browsers like Opera, Chrome, Mozilla Firefox, etc.
Selenium helps in the integration of open source frameworks like TestNG, JUniy, etc.

Who Should Take up Selenium Testing Training course in Bangalore?

Selenium is an open source tool and anybody can use it. Knowledge of basic Java is required to kickstart the project. Software developers, testers, QA Engineers, system analysts, administrators, and BI and ETL professionals can take up the Selenium testing courses in Bangalore. 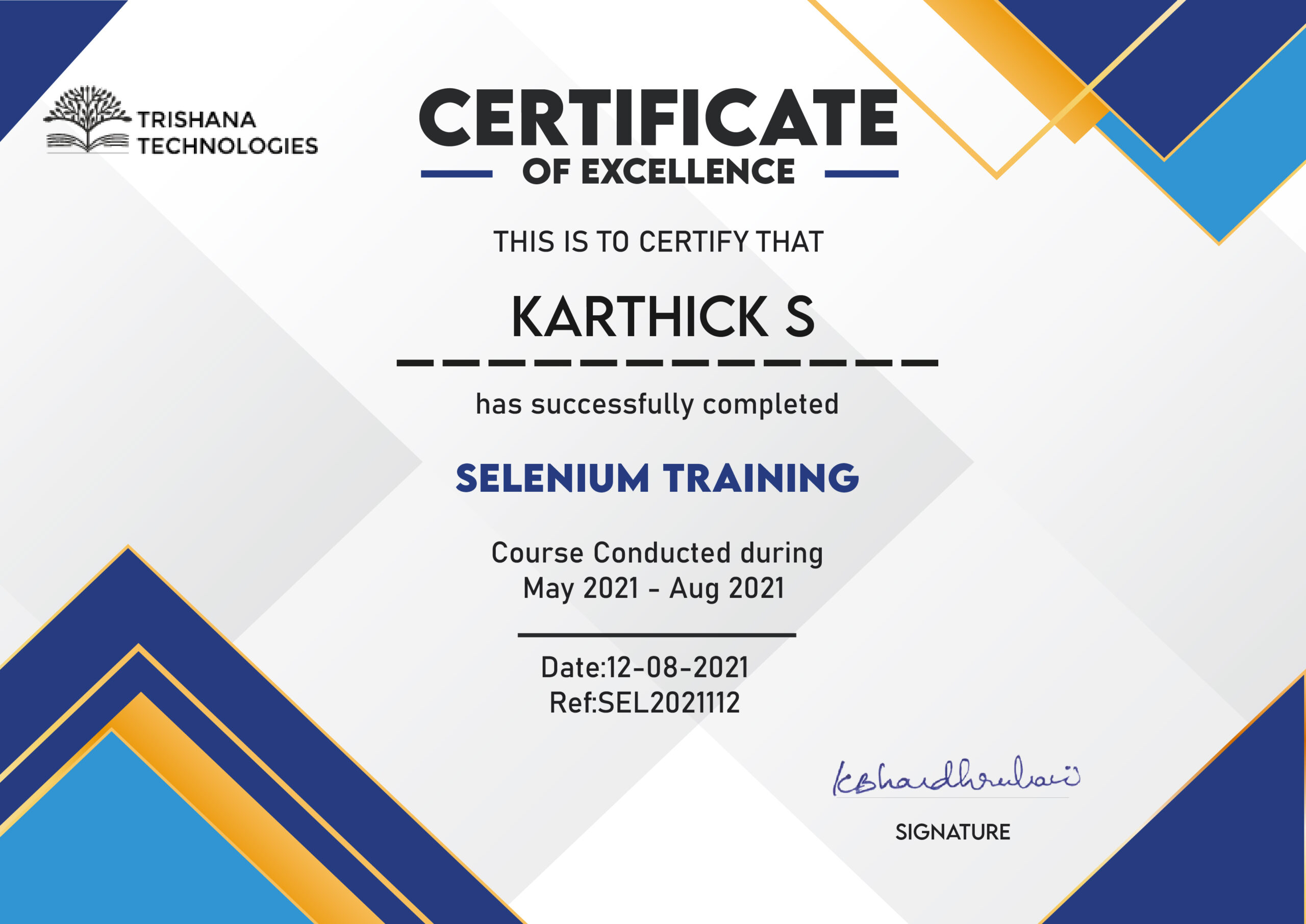 I’ve done Python online classes under Jalavathi trainer. Training sessions were completely practical oriented, reasonable course fees and even more flexible timings too.. She shared all the useful soft copies documents whenever i required. Thank u so much especially cleared my doubts whenever i asked to you. Such a nice management they coordinated very well!! Thanks Trishana technologies team!!!