About the Course - The Best Python Training in Bangalore

Python is one of the popular languages which are used by major companies for web development purposes. Google mostly uses it for their web spider and search engine code. Yahoo has made “groups”: and “maps” features with Python while the Central Intelligence agency has made a full website with this. Additionally, Python works well in commercial games, business software, educational application animation system, and different types of software.

What is Python or Introduction to Python training in Bangalore

Python is simple and easy to learn syntax which emphasizes readability and reduces the cost of maintenance. This is an interpreted, object-oriented, and high-level programming language that includes dynamic semantics. The combination of dynamic typing and dynamic binding has made it attractive for rapid application development and it can be used as a scripting or glue language to connect existing components together. It supports different modules and packages which help to encourage program modularity and code reuse. Here the extensive standard library is available in source and in binary form without any charge for all the major platforms and it can be distributed freely.
If you do Python training in Bangalore, then you will fall in love with Python because it has increased productivity. You will not find any complications step here and the edit-test-debug style is incredibly fast here. The debugging python programs are easy where a bug or bad input never causes a segmentation fault. If the interpreter discovers an error then it automatically raises an exception. The quickest way to debug a program is to add a few print statements to the source.

You can say Python is one of the best scientific languages and the first choice of scientists. At Trishana Technology, with the Python training in Bangalore, you can learn various choices for web development like for Frameworks such as Django and Pyramid, for Micro-Framework such as Flask and Bottle, and for advanced content management systems such as Online and Django CMS. Python language is different from other languages because.

Who should learn Python training in Bangalore?

Nowadays programming language has gained a lot of importance. With the course of Python Certification in Bangalore at Trishana Technology, you will learn all the basic features and advantages of Python language and it will make you an expert in this field. Except for that, Python is considered one of the most popular and in-demand programming languages. So if you want to make a bright career then you should go for Python. Python is best for people who are from mathematics, statistics, and science background and have a great interest in the programming language. python is just a base programing language. with the python what we going to do is important. which means python specialization, there are so many ways to use python in IT Environments. they are .Python IOT, Python Games, Python Automation, Python Networking, python Data Science , Python Machine learning , Python SQL, Python Django, Python Scripting, these specialization is very useful to get a job in IT Industry, students also easily choose their specialization depends on their interest.

As we are one of the Best Python online Training Courses in Bangalore, we at Trishana Technologies have included all the important topics which will help you in mastering the course efficiently and will also help you in getting placed in top MNC’s. We have included topics on a brief introduction on Python programming in Bangalore , Conditional statements, Looping, Control statements, string Manipulation, Lists, Tuple, Dictionaries, Functions, and many other relevant topics crucial for this course. Register now for python training in Bangalore. 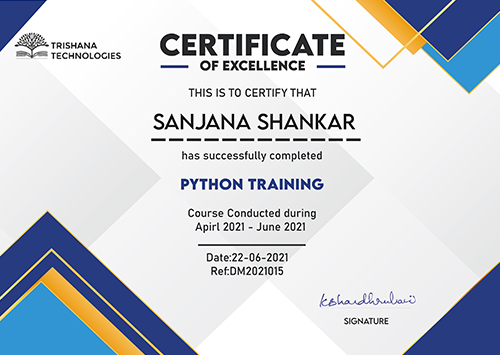